The National Center for Child Health and Development (NCCHD)’s group consisting of Mureo Kasahara, Executive Director, Akinari Fukuda, Medical Director, and Seisuke Sakamoto, Deputy Director, of the Organ Transplantation Center, Reiko Horikawa, Medical Director of Endocrinology and Metabolism, and Akihiro Umezawa, Director of the Center for Regenerative Medicine, conducted the world's first doctor-initiated clinical trial entitled, “Exploratory study into neonatal patients/Clinical trial of HAES transplantation therapy for congenital urea cycle disorder'' on October 21, 2019. This was a clinical trial conducted on humans using human ES cell2）-derived hepatocytes (HAES) produced at the National Center for Child Health and Development1）and the success of the treatment was an unprecedented achievement in the world.

The patient in this clinical trial was a 6-day-old baby suffering from urea cycle disorder, preventing it from decomposing toxic ammonia. This clinical trial was a hepatocyte transplantation in which hepatocytes derived from human embryonic stem cells (ES cells) were injected into the blood vessels of the liver (Fig. 1) and was performed as a "bridge treatment" until the patient was able to undergo a liver transplant safely, at the age of 3 to 5 months after birth (weighing approximately 6 kg). Following the hepatocyte transplantation, the patient did not see an increase in blood ammonia concentration and was able to successfully complete the next treatment, a liver transplantation.

Although the biggest problem in conventional hepatocyte transplantation therapy was that a stable supply of hepatocytes could not be obtained, hepatocytes were stably produced this time from ES cells. It is anticipated, from the success of this trial, “the bridge treatment”, that newborns who were unable to undergo liver transplantation will be safely able to do so. 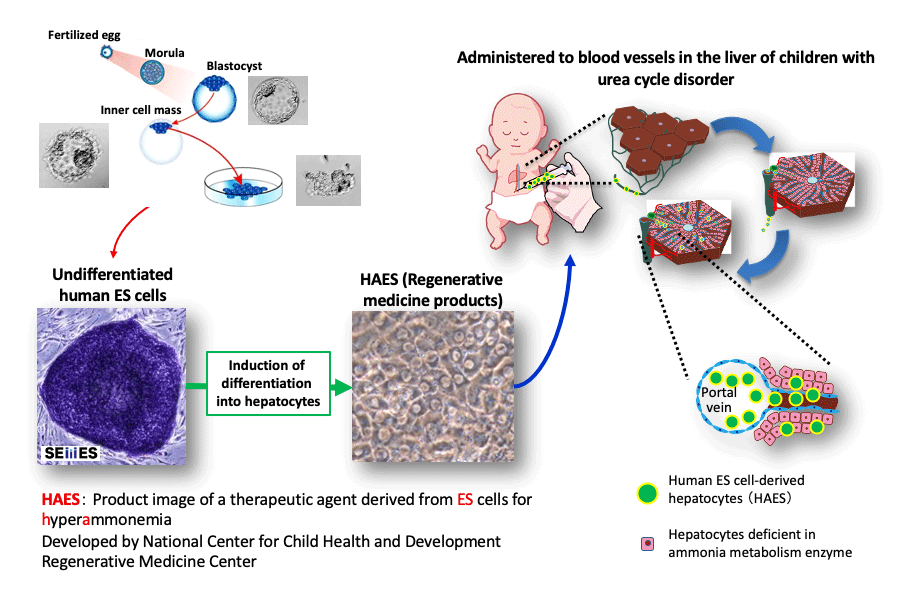 Points of the press release